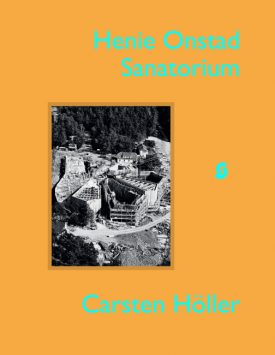 This publication is produced in relation to Carsten Höllerʼs exhibition Henie Onstad Sanatorium at Henie Onstad Kunstsenter in Oslo.

For this occasion, HOK is turned into a sanatorium filled with Höllerʼs works of art.

Höller invites the people of Norway and their international visitors to come to the Henie Onstad Sanatorium, for treatment. Through a series of experimental installations and sculptures, treatment-seekers can float, slide and fly their way through the Sanatorium.

For this catalogue, renowned Italian photographer Attilio Maranzano has documented the sanatorium. The images are printed with a beautiful, extraordinarily high-gloss finish.

Published on the occasion of the exhibition, Carsten Höller: Heine Onstad Sanatorium, at Henie Onstad Kunstsenter, Oslo, Norway (12 May – 10 September 2017).