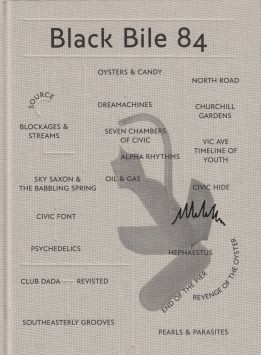 This Publication follows on from Rick Buckley’s 2015 exhibition and offsite project, Black Bile 84 at Focal Point Gallery and Southend Pier, 19 January to 4 April 2015. Split between the gallery and the Pavilion at the end of Southend’s pier, this was the first time the gallery had installed work on this iconic landmark.

In the Pavilion’s main space, Buckley presented a three screen video installation, End of The Pier, which is shot on and around the 1.2 mile structure throughout the night and inspired by the pier’s eventful history of fires and vessel collisions.

The work examines the structure in detail, from the abandoned lower decks, to the deep piles that connect it to the shoreline. The pier is built on the prime habitat of local Oysters, which feature prominently in the film, clinging to the pier’s ageing metalwork.

Filmed using Steadicam technology, the hauntingly vacant imagery, infers a malevolent force at work in the pier’s unlucky history and alludes to these benign molluscs’ role in these reoccurring disasters.

The project’s title Black Bile 84 alludes to ancient medicinal practices and belief that the body was comprised of four humours, in which the excess production of black bile within the spleen, was believed to resulted in an emotional state of melancholia.

By splitting the art works between two ends of the town, the audience was also physically and psychically directed through the town – an extension of the artist’s wider interest in metaphysical journeys.

Printed in a limited edition of 300.