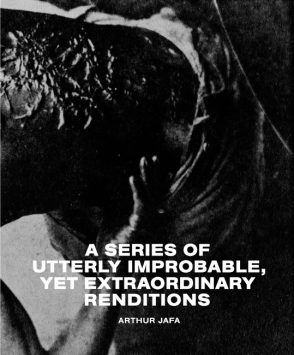 Across three decades the American artist and cinematographer, Arthur Jafa (b. 1960, Tupelo, USA) has developed a dynamic, multidisciplinary practice ranging from films and installations to lecture-performances and happenings that tackle, challenge and question prevailing cultural assumptions about identity and race.

Jafa’s work is driven by a recurrent question: how might one identify and develop a specifically Black visual aesthetics equal to the ‘power, beauty and alienation’ of Black music in American culture?

Building upon Jafa’s image-based practice, this enormous new volume comprises a series of visual sequences that are cut and juxtaposed across its pages. The artist has been collecting and working from a set of source books since the 1990s, seeking to trace and map unwritten histories and narratives relating to black life.

Punctuating this visual material is a series of commissioned texts partnered with a rich compendium of essays, short stories and poetry that has informed Jafa’s artistic practice and which together form an unprecedented resource.

Published after the exhibition, Arthur Jafa: A Series of Utterly Improbable, Yet Extraordinary Renditions at Serpentine Galleries, London (8 June – 10 September 2017), and at the Julia Stoschek Collection, Berlin (11 February – 25 November 2018).