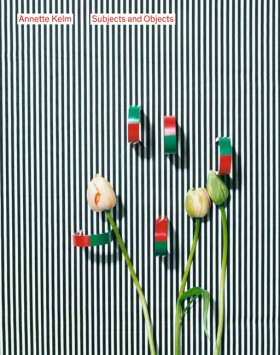 This book marks the occasion of two solo exhibitions of the artist, the first at Presentation House Gallery, North Vancouver (8 September – 14  October 2012), and the second at Kölnischer Kunstverein, Cologne (7 November – 21 December 2014).

The photographs Annette Kelm has produced over the past fifteen years constitute, in all the diversity of their forms, one of the most fascinating, resonant contributions to recent contemporary art. Emerging during an era of photography’s rapid and ongoing reinvention as both artistic object and digital image, Kelm has situated herself as a picture maker of unapologetic clarity.

Her practice employs a comprehensive understanding of and devotion to established traditions of photographic studio practice, marked by an affiliation for analogue film and darkroom techniques, as well as a continuing interest in the pictorial genres of landscape, portraiture and still life.

With recourse to these tried and tested idioms, she has constructed a body of photographic imagery that is remarkable for its visual acuity and resistance to descriptive language.