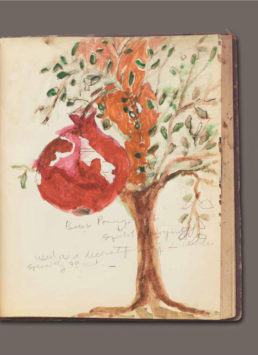 Anna Boghiguian produces drawings and paintings of individuals and urban spaces. For her, individuals are conditioned by the space around them and the self by the walls constructed by cultural, religious or political conditions.

In the 1970s, she composed from the noises of her hometown Cairo, which she then transposed into the field of painting. This book shows her paintings, which are sometimes presented along with her own writings.

Born in Cairo, Egypt in 1946, Boghiguian studied art and music at the Concordia University in Montreal and political science and economics at the American University in Cairo. Throughout her travels the artist developed an intimate visual diary, drawing and colouring her surroundings assimilated with text, poetry and sketches.

By capturing snapshots of the untouchables in India, to architectural wonders in Cairo and Alexandria, the street traffic, or even reinterpretations of antiquity tragedies such as the Necropolis – City of the Dead, the artist relentlessly creates intellectual and visual links between history, literature and poetry as well as present issues.