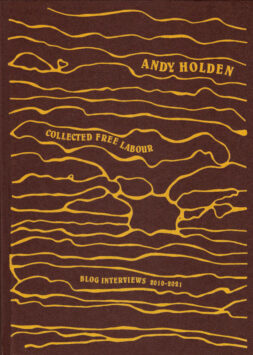 This publication contains selected extracts from interviews with artist Andy Holden undertaken between 2010-2021.

Previously existing online, central fragments of these Q&A blogs have been rearranged thematically and intercut with a new conversation between the artist and the book’s editor, Tyler Woolcott.

With virtual or electronic information famously offering an insecure and impermanent context for knowledge – web pages disappear and are often deleted on a whim – one motivation for this publication is to produce a lasting and stable location for Holden’s ideas, as well as his written and verbal exchanges in printed form.

Another impetus is to create a conversation or extended dialogue that operates as a critical artwork in its own right, one that has developed over an eleven-year period with multiple participants, and contains an essence of Holden’s work as it has grown and advanced.

Speaking in 2021 on his ongoing self-reflective practice, Holden states that: “It’s urgent and perhaps more acceptable to be sincere as a regular mode of being”. This is especially evident within “the climate of intense sincerity dominated by identity politics, moral certainty and climate uncertainty”.

‘Collected Free Labour: Blog Interviews 2010-2021’ has been published to coincide with British Art Show 9, an exhibition that includes Holden’s work and travels from Aberdeen to Wolverhampton, Manchester and Plymouth during 2021 and 2022.

Designed by Calamity James, and produced in collaboration with Division of Labour.