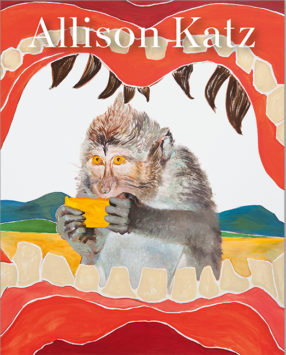 I really love Allison Katz's paintings because they don't sit within one style. She's brilliantly eclectic in the way she brings it all together and that really satisfies me. She's not afraid of experimenting with all these seemingly conflicting tastes. I would like to be able to paint well. And if I could, I would definitely take a leaf out of Allison Katz's practice and just go for it! — Staff Pick / Suz

Highly representative of a new generation of artists tackling with painting and what is it to be a contemporary painter in the 21st century, she is also creating objects, posters, videos, installations, and collaborating with artists such as Camilla Wills, Fredrik Vaerslev, and DAS INSTITUT.

Primarily a painter, Katz challenges this classic medium par excellence through the diversity of her imagery, an eclectic range of references, the here-and-nowness of her brushstroke’s trace, and the site-specificity of paintings designed to occupy a particular space.

She rejects formal or thematic coherence and therefore resists the labeling of a style. Avoiding narrative or continuity, the artist instead chooses to approach each canvas anew, taking on different personas, and sometimes forcing opposing tastes to coexist uncomfortably within a single tableau.