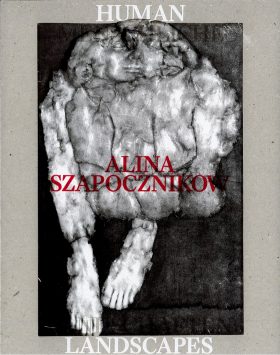 Alina Szapocznikow (1926–1973) created an extensive and expressive oeuvre, in which she was intensively concerned with the human body, right up to her untimely death.

In her sculptures, photographs and drawings she divided female bodies in particular into fragments such as lips, breasts, stomachs and limbs, to put them back together again in new ways and to integrate them as traces in her work. Her own body often found its way into the work in the form of casts.

With this she revolutionised the expressive possibilities of sculpture. This catalogue traces this artistic development by means of work from between 1954 and 1973, from early figurative sculptures to the ‘awkward objects’ which are strongly influenced by surrealism and pop art.

Published on the occasion of the exhibition, Alina Szapocznikow: Human Landscapes at The Hepworth, Wakefield (21 October 2017 – 28 January 18), and at Staatliche Kunsthalle, Baden-Baden (20 July – 7 October 2018).