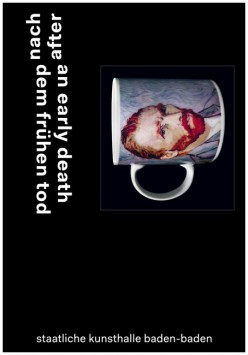 Living artists are the sole creative authority in regard to their body of work and often determine how it is perceived. But what happens when an artist dies at a young age, leaving behind the idea of an unfinished work?

In this case, other factors determine the continued existence of the artist’s oeuvre, especially within the tensions that arise from an early death. External forces are at play, and they dictate different kinds of success stories.

The exhibition After An Early Death presents numerous case examples from the spectrum of posthumous strategies applied to an artist’s body of work over the last 100 years. A modern prototype of the suffering artist is Vincent van Gogh, who barely sold a painting during his lifetime, a popular and often-repeated fact.

The different strategic means of cultivating and perpetrating the ‘myth’ of the artistic persona and of promoting an incomplete body of work is demonstrated through the artists selected for this exhibition, including Jackson Pollock, Eva Hesse, Christoph Schlingensief, Dash Snow, Hélio Oiticica, Bas Jan Ader, Jean Michel Basquiat, Ana Mendieta, and Keith Haring, among others.

Published on the occasion of the exhibition After an Early Death at Staatliche Kunsthalle, Baden-Baden, 31 March – 21 June 2015.