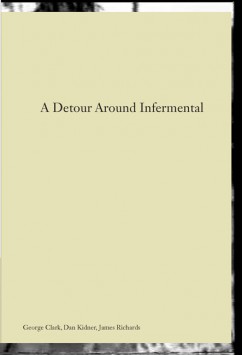 A Detour Around Infermental examines the historical legacy and contemporary relevance of the video publication Infermental, the first international magazine on videocassettes, initiated by the Hungarian filmmaker Gábor Bódy in 1981.

The first issue, which had ambitions to be a ‘non-geographical Bauhaus’, was produced whilst Bódy was on a DAAD residency in Berlin, and each subsequent issue was put together in a different city.

Beginning in Europe, and with a distinct focus on connecting video and media artists in the east and the west, Infermental soon became truly international when later editions were produced in North America and Japan.

Each edition featured between thirty and one hundred artists contributing complete films, excerpts, trailers, interviews and fragments, and was assembled by a different editorial team.

The book was published in 2012 after the exhibition Infermental  at Focal Point Gallery, Southend n Sea, 19 July – 4 September 2010.