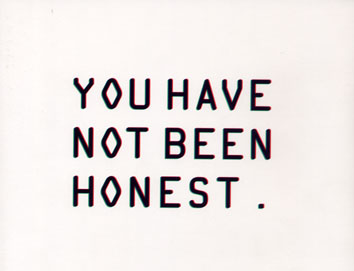 Published to accompany the British Council survey show of recent film and video from the UK, this catalogue features contextual essays by the curators, plus artists’ texts and individual biographies.

Curated by Colin Ledwith and Polly Staple, You Have Not Been Honest features an innovative generation of British artists using documentary and narrative film structures to new ends. A strong proportion of the works draw the viewer into a personal and subjective space, mixing influences from cinema, home movies, news-media and archive footage. These films range in subject-matter from immersive intimate portraits in domestic settings to seemingly objective narrative standpoints which blur the distinction between the truth as presented through the camera and actual reality.