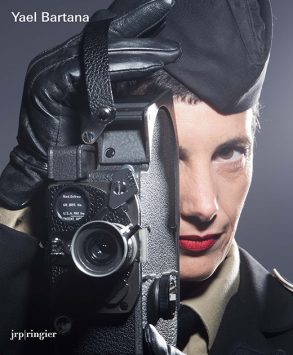 This first monograph dedicated to the work of Yael Bartana (b. 1970 Israel) gives a comprehensive overview of the artist’s films, installations, performative projects, photographs, and sound works of the past 15 years.

From Bartana’s early video vignettes to her most recent project, What if Women Ruled the World? (2017), by way of her monumental trilogy, And Europe Will Be Stunned (2007–2011) with which she represented Poland at the 54th Venice Biennale, the book highlights the artist’s fascination with the ways in which social rituals shape both individual identities and collective memory.

Far from a mode of direct documentation, Bartana’s works are themselves modelled on the aesthetics of the ritual, and are therefore, above all, performative works, which unapologetically seduce us. Her films draw attention to the fact that cinema is a ritual, and that the camera, perhaps better than any other device, mimics the ritualistic in its ability to fetishize, seduce, and draw us into the ceremony we are watching.

The artist’s new work, What if Women Ruled the World? is commissioned and produced by Manchester International Festival and European Capital of Culture Aarhus 2017. Published with the Musée cantonal des Beaux-Arts, Lausanne.