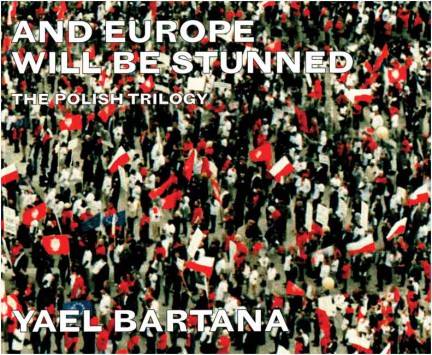 And Europe Will Be Stunned brings together for the first time the compelling trilogy of films made by Yael Bartana in Warsaw in Poland between 2007 and 2011.  The same year, Bartana became the first non-national to exhibit in the Polish Pavilion at the 54th Venice Biennale.

Revolving around the activities of the Jewish Renaissance Movement in Poland, a group that calls for the return of three million Jews to Poland, Bartana’s films traverse a landscape scarred by the histories of competing nationalisms and nightmares across Europe and the Middle East.

An extensive sequence of colour stills from the three films – Mary Koszmary (Nightmares), Mur i Wieza (Wall and Tower), and Zamach (Assassination) – is accompanied by transcriptions of the speeches in the films and various essays.