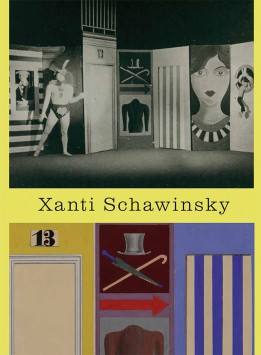 The work of the late Swiss artist ‘Xanti’ (Alexander) Schawinsky (1904-1979) was until recently almost inaccessible. A long legal dispute and the fact that Schawinsky’s work as a teacher was so integral to his artistic praxis (rather than only presenting his work in galleries and exhibitions), explain why much of his oeuvre is to be found in just one location today.

In his lifetime, Schawinsky was mainly known for his work in the theatre department at the Bauhaus. In the 1930s, while teaching at Black Mountain College, a legendary art college in North Carolina that provided refuge for many European emigrants during the Nazi era, Schawinsky, building on his Bauhaus work, developed his dramatic theory known as Spectodrama.

Involving multimedia productions that examine elementary phenomena such as space, motion, light, sound, or colour from scientific, technical, and performance-based perspectives, it represents an early form of the ‘happening,’ which would later be made famous by another affiliate of the same institution, John Cage.

His work may thus also be seen as representative of the transatlantic exchange of artistic ideas that was induced by the political situation and had a lasting impact on art history.

This publication is conceived as an indispensable monograph on the artist – the most recent book, which focuses on the works from his time at the Bauhaus, came out almost three decades ago. This is the first survey of Schawinsky’s extraordinarily prolific output over the course of five decades. Published with Migros Museum for Contemporary Art, Zurich.