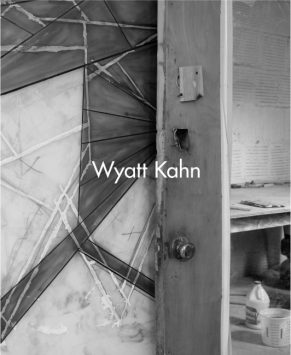 This monograph dedicated to Wyatt Kahn (b. 1983, New York) encompasses his painting production from 2011 to 2017, and introduces his recent exploration of photography.

Kahn is primarily known for his investigations into the visual and spatial relationship between painting and sculpture, drawing inspiration from the body, urban architecture, and the natural world.

Using unprimed canvases stretched over wooden frames, he assembles complex wall-mounted works in which the gaps between the individual canvases give rise to abstract or pictorial compositions. Rather than tracing the lines and shapes directly onto the canvas itself, he turns them into physical components of the artwork.

Referencing the tradition of minimalist abstraction, Wyatt Kahn’s monochrome multi-panel ‘paintings’ are informed by a desire to explore non-illusory forms of representation. In essence, their subject becomes the interplay between two and three dimensions, as experienced via shifts in surface, structure, and depth.

In Kahn’s work, the wall upon which the work is hung becomes an integral part of the composition. Interested in a painting’s potential to function as the very embodiment of the object it depicts, Kahn has also developed works in which the shaped stretchers combine to create the form of an actual object, while a synthesis of hand-drawn motifs and words epitomizes its essential qualities.