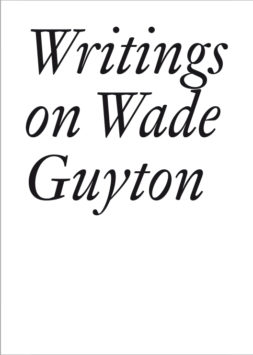 Few figures have had an impact as important on our understanding of artistic production after the turn of the millennium as Wade Guyton, whose practice has widely prompted reconsiderations of longstanding models of medium-specificity, appropriation, and critical engagement—and, perhaps more provocatively, performativity and readymade gesture—in art.

This volume takes stock of critical perspectives on Guyton’s work over the course of the artist’s career, assembling both expansive, scholarly essays and more concise, journalistic assessments by an international array of authors including Daniel Baumann, Kirsty Bell, Bettina Funcke, Tim Griffin (editor), and John Kelsey.

Just as significantly, this book holds up a mirror to the rapidly changing context for Guyton’s work, which in a few short years shifted from discussions of the widespread use of modernist motifs in art during the early 2000s to others revolving around the artwork, anticipating its continuous circulation as digital media became ubiquitous in art and culture alike.

Published with the Kunsthalle Zürich. This book is part of the JRP|Ringier Documents series.