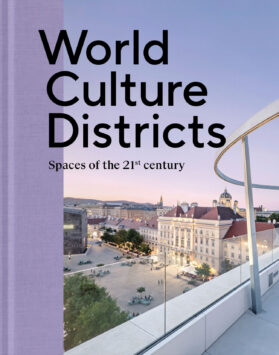 Cultural districts are playing a key cultural and social role throughout the world in the twenty-first century. They offer an incomparable density of art and culture and have a profound influence on the development of cities and regions.

‘World Culture Districts’ presents the first-ever overview of this phenomenon, featuring fifteen of the most important cultural districts on six continents.

The range of different kinds of cultural districts and their respective influence on space and society is revealed, and essays by international experts such as Gail Lord, Adrian Ellis, Matthias Sauerbruch and Louisa Hutton, Vitus H. Weh and Christian Strasser shed light on current issues surrounding their development and impact.

£34.00
Coming soon
(subscribe to our newsletter be the first to know when this title is available)