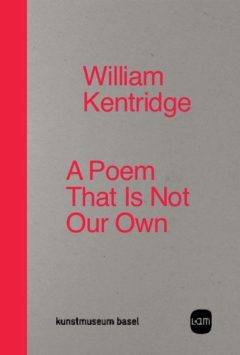 A Poem That Is Not Our Own aims to create a link between his early drawings and films from the 1980s and 1990s and his most recent work as well as examples of the more recent output, including the first adaptations for museum presentation of elements from, The Head & The Load which premiered at the Tate Modern, London, in the summer of 2018.

A sumptuous production involving film projections, shadow play, and an ensemble of performers, the sprawling procession, which defies conventional genre boundaries, sheds light on a neglected chapter of history: Africa’s role in World War I.

Published on the occasion of the exhibition William Kentridge: A Poem That Is Not Our Own at Kunstmuseum Basel (8 June – 13 Oct 2019).