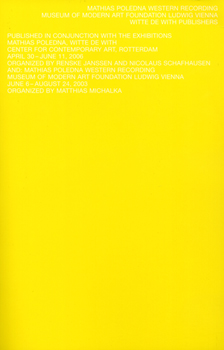 Mathias Poledna’s artistic practice is informed by historical research, by archives and collections. In his work, he develops his interest in the histories of avant-garde cinema, of modernism in architecture and design, and of the crossovers between popular culture and high art. In recent years, his projects have taken the form of highly formal filmic reconstructions that suggest ephemeral moments from 20th century culture, often popular culture.

In the 16mm film installation Western Recording (2003) we see a young man rehearsing the song City Life (1969) by singer-songwriter Harry Nilsson. This song was originally recorded in the famous Western Recording studio in Los Angeles, where the Beach Boys recorded their seminal album Pet Sounds.

Instead of simply recreating this historical moment, Poledna singles out every element from its background. Rather than adopting a nostalgic attitude towards this fragment of pop culture, he puts it formally under the microscope. Western Recording is an unusual representation of music history in that it depicts the rehearsal process, with all its flaws and repetitions, and not the polished end result that we have come to expect from cultural production.