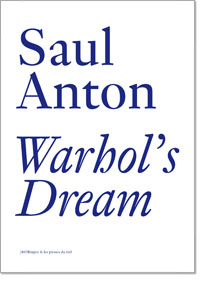 Andy Warhol and Robert Smithson are arguably two of the most influential artists today. Indeed, one might say that they have become dominant figures in the mythical origins of contemporary art in the 1960s. Warhol’s Dream returns, as it were, to the scene of the crime in order to explore and re-examine the aesthetic and conceptual gestures that define their seminal work. No small task, as art historian Pamela Lee writes in her introduction, ‘we are in absolute thrall to their critical legacy.’

Warhol’s Dream, however, is not a critical or an art historical essay. Rather, it takes up the perhaps impossible task of imagining just what Andy and Bob might have had—and might still have—to say to one another. Taking as his point of departure the tonally sophisticated texts and voices of Warhol’s The Philosophy of Andy Warhol and Smithson’s famous critical writings, Anton has written a fiction that takes up this critical legacy by exploring how these artists challenged our understanding of criticality in the way they transformed questions of objecthood, reproduction, and the relation of art to language.

With an introduction by Pamela M Lee, Associate Professor Art History at Stanford University. Documents is a new series published with les Presses du réel and dedicated to critical writings.