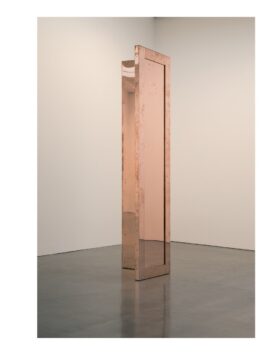 Walead Beshty´s artworks are mostly geometrically abstract in form and industrially produced. This reminds us of the principles of minimal art.

However, Beshty does not understand his works as autonomous objects that are developed in interaction with the exhibition space and the viewers.

Instead, he sees them within a broader context in which they are produced, transported, installed, exhibited, viewed, traded, and discussed.

Beshty’s works make this interdependence clear: they are conceived in such a way as to document their own genesis as well as to make visible the influences of the system in which the works also function: as a commodity, a carrier of
meaning, a means of transport, a news archive, a fetish, an object of research, etc.

Hence the artist deals on the one hand with the basic conditions of artistic work and on the other hand with the context in which the works are embedded, evaluated and sold.

The mutual influence of all these elements can be experienced in his exhibitions as a dynamic network of artistic freedom and system constraints.