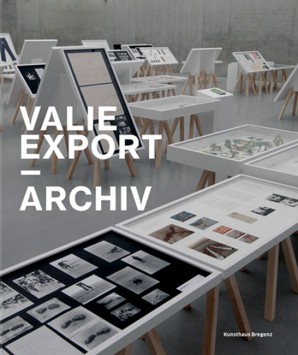 In a revolutionary way, starting in 1968, the Austrian artist VALIE EXPORT pioneered the way for feminist and socially critical art. The exhibition, VALIE EXPORT: Archiv at the Kunsthaus Bregenz (29 October 2011 – 22 January 2012) presented the artist’s work in conjunction with her extensive archive.

Works such as TAPP und TASTKINO and Aktionshose: Genitalpanik are shown not only as autonomous works, but also within the context of reference material from the archive. This includes newspaper articles and sketches, film scripts, and Polaroids, collages and conceptual drawings.

This catalogue is conceived as a critical engagement with the work and the subject of archive. The publication contains essays by Yilmaz Dziewior, Jürgen Thaler, and Astrid Wege. With numerous reproductions from the artist’s archive, the publication also documents VALIE EXPORT’s way of working with which she approaches and engages with a theme.