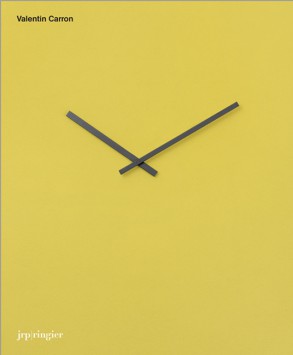 The sculptures of Valentin Carron mark a renewal of appropriationist discourse: through the re-employment of vernacular forms that are not part of the dominant culture, the artist develops a project that confuses genres.

Neither authentic nor kitsch, neither readymade nor really craft, these objects play with ambiguity (fake wood, fake concrete, fake bronze, etc.) and with an iconography of power and authority (public sculptures and commemorative monuments, traditional forms, etc.).

Alongside several artists such as Andro Wekua, Mai-Thu Perret, and Vidya Gastaldon, Valentin Carron, whose work has been shown in the last few years at the Kunsthalle Zürich, the Palais de Tokyo in Paris, and the Conservera in Murcia, marks the emergence of a new artistic scene in Switzerland.

This book offers an overview of his work and newly commissioned essays by Andrea Bellini and Christy Lange.

Published with the support of Galerie Eva Presenhuber, Zurich and 303 Gallery, New York.