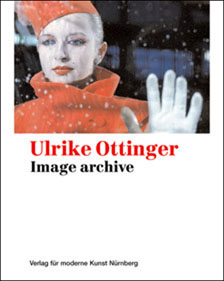 ‘What is specific for me about photography, as well as film, is that as analog media they create possibilities to reflect relationships between reality and fiction, between nature and art. This also determines the way I encounter people photographically. For example, I like to work with photographs that show the relationship of people to their environments.’ – Ulrike Ottinger

Ulrike Ottinger’s films and photographs investigate remote corners of the world, using fictional and documentary means. Her associatively connected voyages meander through the periphery of cities, countries and societies – backdrops that capture human splendour and misery, reality and illusion, surfaces and depths.

Ottinger’s aesthetic tends to be theatrical and to exaggerate banal existential realities. Literary and historical figures appear in her films and photographs with eccentrics and freaks. Her elaborately decorated micro worlds are in part the result of her travels and passion for collecting. Her archive of objects and images is used to embellish her works.

Ulrike Ottinger was born in 1942 and lives in Berlin. She is a well known filmmaker and retrospectives of her works have been held at MoMA in New York and Tate Modern in London. In 2002 she took part in documenta 11.