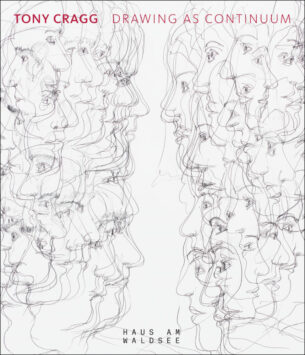 This catalogue offers an overview of the graphic and printing works of Tony Cragg from the early 1990s to the present day.

On display are hand drawings, lithographs and watercolours, which familiarise the viewer with the strongly scientifically oriented thinking of the British sculptor.

Right from the start, Cragg used the pen both for technical communication as a sketch and as a way of contemplating the form and content of complex questions that affect the macrocosm as well as the microcosm.

In the 2000s, he also produced autonomous drawings, watercolors and series of color lithographs. Laws of the digital world can also be the subject of his searches, as can fossil finds from ancient times.

In the works on paper, Cragg not only ties the idea of time and space to objects, but also to the human body. Since 2010 line-density drawings of heads and faces have been created. In a multiplied form, they move into one another in a tight space in flowing motion gesticulating. Ideas of communication, mental agility, mirroring, but also of automation and liquefaction in the emerging age of artificial intelligence arise.

Published on the occasion of the exhibition, ‘Tony Cragg: Drawing as Continuum’ at Haus am Waldsee, Berlin (17 September 2021 – 9 January 2022).