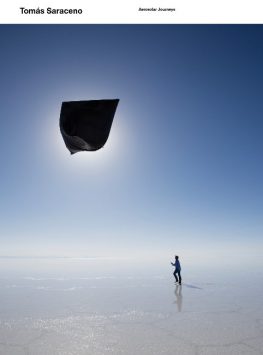 With his room-filling installations created at the interface of art, architecture and the natural sciences, Tomás Saraceno speculates on future forms of human coexistence.

As a qualified architect Saracenoʼs interests span across structural studies to biology to atmospheric physics.

This book is dedicated to his actual projects and accompanies them with numerous photographs, short introduction texts and scientific essays.

His works can be understood an ongoing research, which pursues – oriented on a multidisciplinary level – the idea of a ‘feasible utopia’.