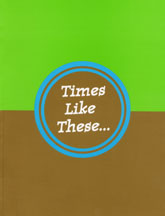 Simon Grennan lives in Manchester, Christopher Sperandio in New York, and the two communicate via the internet. Together they are fast becoming renowned on both sides of the Atlantic for their witty and original interactive art projects, ‘public art’ in which other people control the outcome. 1995 is Cornerhouse’s 10th anniversary and to mark the occasion, Grannan and Sperandio invited visitors to describe their most memorable ‘Cornerhouse moments’. Ten entries were chosen and the two artists recreated and photographed these situations under the direction of the people whose memories were being captured on film.

£6.95
Buy now
(Your order will be fulfilled by NBN International)