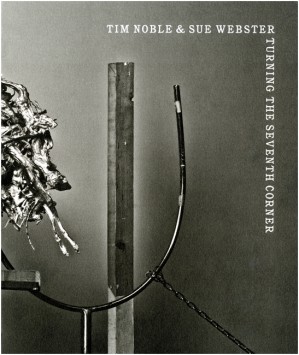 Blain|Southern has published Tim Noble & Sue Webster: Turning the Seventh Corner, which comprehensively documents the conception and realisation of the artists’ recent exhibition at Blain|Southern, Berlin.

A monumental, site-specific installation, Turning the Seventh Corner was created by Noble and Webster in collaboration with the architect David Adjaye. It was exhibited from April – July 2011, and is the artists’ most ambitious project to date. The installation responded to the monumental tombs of the Egyptian Pharaohs and was specifically inspired by The Great Pyramid of Giza, one of the Seven Wonders of the Ancient World.

This publication includes intriguing images, drawings and diagrams which chart the development of the work, and the artists’ own photographs reveal the intricate process of how the installation’s internal sculpture The Gamekeeper’s Gibbet was created.

A foreword written by David Adjaye, which describes the working relationship between himself and the artists, is accompanied by both James Putnam’s essay, who was formerly a curator of the British Museum’s Egyptian Antiquities Collection, and an interview between the three collaborators conducted by curator Louisa Elderton.