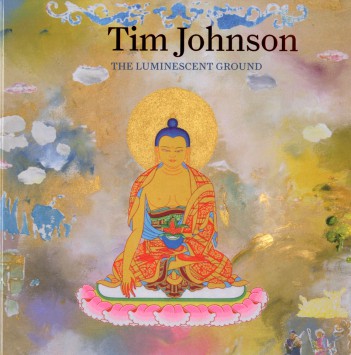 This catalogue documents the first ever European survey of work by Australian artist Tim Johnson.

His early works include ‘installation’ photography and text pieces made during a trip to England, France, Germany and the Netherlands during 1970–1971, photographic documentation of performances, and paintings and video inspired by Australian punk band Radio Birdman.

The paintings with which Johnson came to prominence during the 1980s, arising out of collaborations with aboriginal artists such as Clifford Possum Tjapaltjarri, are key to our understanding of his artistic practice overall, and the spirit they embody continues to inform his new and recent work.

Now Johnson’s paintings are an extraordinary combination of influences and references. They are populated by Buddhist deities, Bodhisattvas, Native Americans as well as aboriginal figures, Tibetan monks, Vietnamese farmers, extra-terrestrials and Christian angels. These figures float in a pictorial space articulated by Papunya dots and circles, and fragments of landscape – often oriental hills and cloudy skies – that betray a world view that is at once conceptual and visionary.