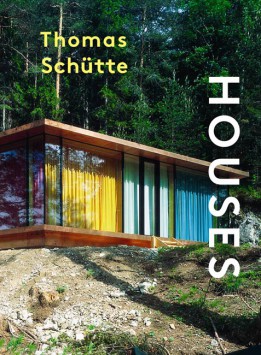 Thomas Schütte’s first scale models in the 1980s presented rooms to live and work. While the atelier houses reflect the artist’s own activity, the symbolic forms for bunkers, which reveal Schütte’s sceptical view of things and his black humour, offer security and a place of retreat.

Twenty years later, Schütte once again took up imaginary model architecture with light pavilions made out of wood and leftovers from his atelier, commercial buildings like petrol stations or car parks, as well as concert halls and event locations.

While the first models remain rooted in a fictional world, the models of the One Man Houses from 2003 on were converted into reality.

In 2007 he built a house for two French collectors, and in 2009 – following the Ferienhaus für Terroristen – a pavilion-like house with glass walls as a possible design for new architecture as well as an oppositional praxis in our society.

This publication provides a comprehensive survey of the architectural models from the first years to today’s design projects.