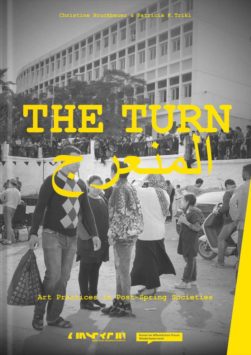 The changes and new beginnings brought about by the Arab revolution have made an impact far beyond the Arab world.

This democratic movement has also effected a paradigm change in local art practices, and artists have begun to claim public space and to act as agents of civil society.

This publication presents several interventions and projects that took place in public spaces in urban and rural post-revolutionary Tunisia and embeds them into an extended theoretical context for the first time.

Art theoreticians, anthropologists and urbanists from Libya, Egypt, and Syria report about artistic art interventions in their countries and to reflect critically on the role of art in periods of political transformation.

The Turn includes not only relicts of performances and installations, but also objects (some of which have been adapted to the white cube) and was designed by the curators.

The following issues are addressed: What remains of these projects, which international artists also took part in and which were largely funded by foreign institutions? Can we measure their effectiveness? What role does art play in times of transformations?

As expressions of socio-political issues and direct social engagement, the ‘interventions’ are rooted in the tradition of the ‘Social Turn’ in contemporary art history.

This publication accompanies the exhibition The Turn, at kunstraum niederoesterreich, Vienna, 18th March – 14th May 2016.