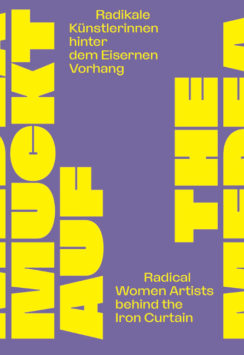 Medea: femme fatale and überwoman from the East.

The view to the East teaches us how non-conformist art established freedom under similar conditions and came to specific, also specifically female, forms of expression.

In the years before the fall of the Berlin Wall in 1989, East European writers and painters often turned to ancient mythology when they wanted to express their discontent with Communist rule.

Their interpretations of mythological figures like Medea, Cassandra, or Penthesilea were crucial in shaping contemporary images for women, and sometimes they were straight-up punk.

Working under the radar of the accepted art establishment, the women artists in this exhibition provoked, protested, played with fire, and experimented while refusing socialist and bourgeois stereotypes.

Published on the occasion of the exhibition, The Medea Insurrection: Radical Women Artists Behind the Iron Curtain at Kunsthalle im Lipsiusbau, Staatliche Kunstsammlungen Dresden (8 December 2018 – 31 March 2019), and at The Wende Museum, The Armory, Culver City, California (9 November 2019 – 5 April 2020).