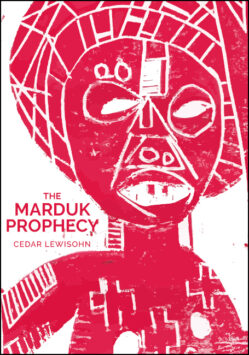 The Marduk Prophecy is a limited edition riso-printed publication (created by London-based artist, writer and curator, Cedar Lewisohn) that takes the form of an image-led wordless comic book.

Produced from handmade woodcuts and lino prints, the work’s images are sourced from objects from ancient African and Mesopotamian civilisations in museum collections. These include treasures in the British Museum – whose Benin Bronzes were looted and whose ownership is contested – to those in the Pitt Rivers Museum and the Petrie Museum.

Symbols of the contemporary world that refer to youth culture in the UK, such as Drill Music – the former British Prime Minister Teresa May tried to ban the genre for glamorising law-breaking – are also inserted into the book’s abstract narrative alongside a representation of the social and political issues around knife crime.

Common precepts are found in historical and contemporary modes of archiving – knives in police collections use the same categorial devices as museum displays of ancient weapons, for example – and Lewisohn’s unassuming storyline draws unexpected parallels to examine tropes of colonialism and its construction of otherness and criminality, alongside issues connected to urban geography of the artist’s home city of London.