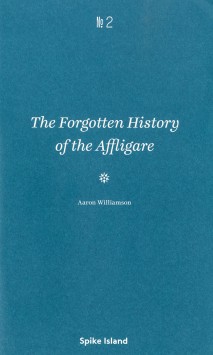 Aaron Williamson was the Adam Reynolds Memorial Bursary resident at Spike Island from February to April 2010. During this period the artist developed a body of work related to The Affligare, a medieval European tribe of disabled mendicants, or ‘beggar cripples’. The resulting pamphlet introduces and describes a series of objects belonging to the tribe that were discovered beneath a barn in Hildesheim, Germany in 1972.

In the deadpan academic prose of The Forgotten History of the Affligare, Williamson pushes fictional strategies to absurd length as he subtly makes critiques the politics of disability in contemporary art and museum studies.

Published alongside an exhibition at Spike Island, 1 May – 6 June 2010.

£5.00
Buy now
(Your order will be fulfilled by Ingram Publisher Services)