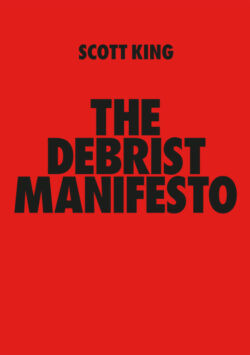 JON SAVAGE: “In a way, it’s an ‘anti-success handbook’ – the direct opposite of all those self-improvement books. Is that deliberate?”

SCOTT KING: “Someone else suggested that it could have been called How To Be A Loser In The Art World, which I thought was funny, and there is an element of that, but it’s broader than that too.

I didn’t set out to write it as an ‘anti-self-help’ book. Quite the opposite, really. I wrote it as ‘my truth’, I didn’t edit it, I just let it pour out… the manifesto, ultimately, is about embracing ‘failure’, looking for the excitement and potential within that – you know – rather than being in a state of constant frustration/fury/misery because you do not have what it is you think you want; it is about embracing what you do have, even if that seems like shit.”