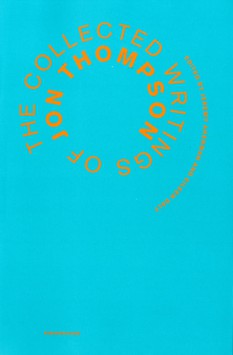 This volume brings together the collected writings of British artist, writer and professor Jon Thompson. As a teacher of artists, Thompson is credited as one of the most influential of his generation.

He began writing in the late 1970s, and unlike much of the previous critical writing on academic art history, Thompson’s careful research, depth of historical knowledge and insight into an artist’s work and approach was quickly recognised as authoritative, fresh and exciting.

Thompson taught at Goldsmiths College, London, Middlesex University and Jan Van Eyck Academie, The Netherlands, and he wrote influential essays about a wide range of artists including his former students Richard Deacon, Steve McQueen and Mark Wallinger. He also wrote extensively about trends in sculpture, art education and changes in art in general.

His texts have been published in exhibition catalogues for the Hayward Gallery, Ikon Gallery and Serpentine Gallery; in Phaidon, Thames & Hudson and Blackwell books; as well as a variety of art magazines and journals.