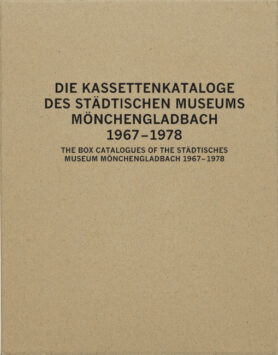 For the first time, the 35 legendary box catalogues of Städtische Museum Mönchengladbach have been published as a book.

Museum director Johannes Cladders developed the idea of catalogues in the form of a box with Joseph Beuys in 1967.

Understated in their initial appearance, the grey boxes provide an unconventional and pertinent overview of the international vanguard art of the period, including seminal movements such as Conceptual Art, Fluxus, Arte Povera, and Pop Art.

Until 1978, Cladders worked closely with exhibiting artists to create such catalogues, which radically re-envisaged the traditional exhibition and museum publication. They embody the participatory approach of their time and instance a vision of a porous democratic work.

Viewers are invited to actively participate in this artistic and institutional endeavour and engage both intellectually and physically. Some of the boxes include posters, booklets, documentation and texts, while others comprise multiples.