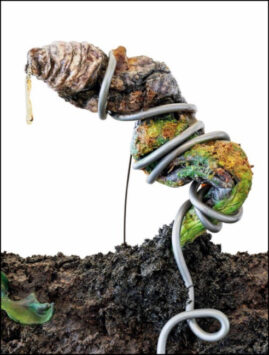 Bottled humanism, coloured neon contaminations, tattered flaps of skin, and limp penises bring humanist self-assurance crashing to the ground. What appears as poison or chemical devastation is in fact an appeal to understand metamorphosis as a state of being.

Over a period of three decades, from the mid-1950s to the late 1980s, the Japanese artist Tetsumi Kudo (1935–1990) created a consistent body of work that serves as a model for contemporary conceptual approaches of Posthumanism and the New Materialism. The artist reflects upon the ideological boundaries between mankind, nature, and technology from the distanced perspective of an unsentimental observer.

In Japan, the nuclear attacks on Hiroshima and Nagasaki produced a caesura; their devastating effects revealed the vulnerability of the human organism. Nuclear disaster is equivalent to a demonstration of both absolute power and loss of control, exposing the paradox inherent in Humanism. Consequently, it becomes necessary to transform the human being. Kudo demonstrates how body parts, plants, and electrical devices converge to form post-human structures.

This catalogue brings together contributions by artists (such as Mike Kelley) and theorists and documents Kudo’s comprehensive oeuvre in work and archive images as well as exhibition views from the retrospective.

Published after the 2016/17 retrospective exhibition at Fridericianum, Kassel.