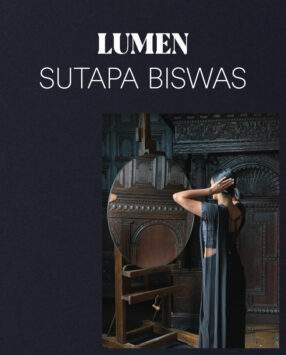 Lumen accompanies the first solo exhibitions of artist Sutapa Biswas in the UK since 2004 at BALTIC Centre for Contemporary Art, Gateshead and Kettle’s Yard, University of Cambridge. Born in Santiniketan, India, Biswas emigrated with her family to the UK in the 1960s. Taking the long histories of colonialism together with personal memories, Biswas’s artworks have meditated on questions of migration, identity and belonging. Her practice has consistently interrogated Western tradition and discourse, pushing past absences, exclusions and limited representations to make evident the entwined histories of culture and politics.

This book details Biswas’s career from its origins in the British Black Arts Movement in the 1980s to her important photographic installations of the 1990s and her subsequent major moving-image works, including her newly commissioned film Lumen. The first substantial publication on the artist in over 17 years, it includes two new conversations with the artist, two commissioned essays as well as a republication of Griselda Pollock’s important text on Biswas’s work, along with a postface reflecting on their relationship in the decades since the essay’s original publication.