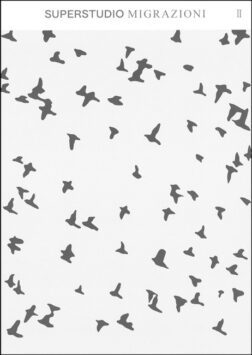 ‘Superstudio grew out of a sense of global crisis and impending doom similar to today’s […] What they saw posed “a radical challenge to the traditional relationship between architecture and ground, city and country, interior and exterior” that would inform their later speculations […] these youthful provocateurs would make their case with satirical photomontages, furniture designs, films and exhibitions, becoming one of the most influential architecture groups of the era – without building a single thing.” – Oliver Wainwright, The Guardian (January 2021)

Begun in 1966, Superstudio’s journey led its members to reflect on ways of inhabiting a ‘round and rotating’ world.

Superstudio was an architectural firm, founded in 1966 in Florence, Italy by Adolfo Natalini and Cristiano Toraldo di Francia. They were later joined by Gian Piero Frassinelli, Alessandro and Roberto Magris, Alessandro Poli. For more than a decade, this collective speculated on the ways in which to inhabit the world as transformed by capitalist forces and technological evolutions.

Superstudio was a major part of the radical architecture and design movement of the late 1960s. Its influential work has inspired architects ever since, including Zaha Hadid, Rem Koolhaas and Bernard Tschumi, among many others.

This three-volume publication offers a new perspective on the group’s œuvre, described as ‘radical’ by Italian art historian and curator, Germano Celant. More than an exhibition catalogue, it proposes three parallel yet complementary explorations – through texts and interviews, through images and through archives – of the collective journey that pushed architecture to its limits.

At first ‘super’ and fundamentally realistic, and adopting consumption and production mechanisms in an ironic and critical manner, Superstudio’s architecture evolved to encompass ‘things, the body, the Earth’, before dissolving all materiality, retaining only a symbolic dimension and blending with life itself.

Published on the occasion of the exhibition, ‘Superstudio Migrazioni’ at CIVA, Brussels (15 January – 16 May 2021).