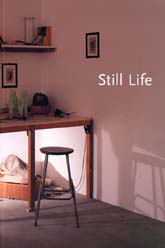 ‘Often regarded as insignificant in the hierarchy of art’s traditional genres, the still life has proved to be a remarkably adaptable and enduring mode of expression. Within its seemingly narrow framework of ‘everyday objects’, the still life, far from dying discreetly away in the early 21st century, has grown, proliferated and become almost luxurious in the many ways it has chosen to manifest itself in contemporary art…. This exhibition, the most recent in a series which explores traditional artistic genres, takes a broad look at many of the themes and ideas implicit the subject of still life. It also provides an opportunity to bring together work by a range of contemporary British artists…’ [taken from the foreword by Andrea Rose]

Published alongside a British Council international touring exhibition in Latin America (Chile, Venezuela, Argentina, Colombia) 2002 – 2003. This catalogue groups together a wide range of work loosely bound by the idea of the historical Still Life and is part of the BC series of titles which explores traditional artistic genres (see the very popular Landscape catalogue, £11.95, ISBN 0 86355 448 2).