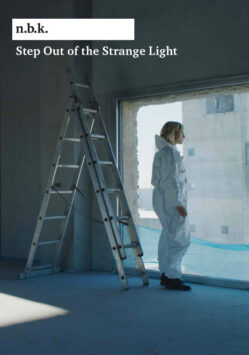 ‘Step Out of the Strange Light’ presents artists who have been awarded the Berlin Senate’s work stipends in the visual arts.

At the heart of many of the contributions is an examination of real and imagined places, shaped both by ideological implications and collective practices.

Several artists in the exhibition use archives and institutional forms of remembering as a starting point to uncover shortcomings and critically intervene in existing mechanisms of power.

A common aspect is the impulse to reveal and question structures that are inscribed in, yet often hidden behind, forms of emergence and transformation of the social condition.

Accompanies the exhibition ‘Step Out of the Strange Light’, 26 Mar – 9 May 2021, Neuer Berliner Kunstverein, Berlin.

n.b.k. is the name for the series of printed publications collaboratively worked on by Neuer Berliner Kunstverein and Walther König. The ‘n.b.k Berlin’ series looks specifically at the Berlin art scene.