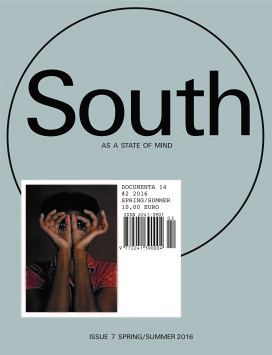 In 2017, for the first time in its history, documenta will be held in two locations: Athens, Greece, and Kassel, Germany, the latter the exhibition’s home since 1955. Prior to the opening of the exhibition, South as a State of Mind, a magazine founded in Athens in 2012, will publish four special documenta 14 editions, edited by documenta 14’s Editor-in-Chief of Publications Quinn Latimer and Artistic Director Adam Szymczyk.

Writing and publishing are an integral part of documenta 14, and this journal heralds that process. A site of research, critique, art, and literature, South as a State of Mind parallels the preparatory work on the exhibition and helps frame its concerns with essays, conversations, poetry, fiction, and visual projects by artists, poets, philosophers, scholars, architects, and filmmakers.

While the first volume of the d14 South examined forms and figures of displacement and dispossession, and the modes of resistance found within them, the second volume explores the more enigmatic theme of silence and masks.

The final two volumes will be concerned with ideas of language and ecology, coloniality and neoclassicism, and the relationship between pedagogical, performative, and political processes.