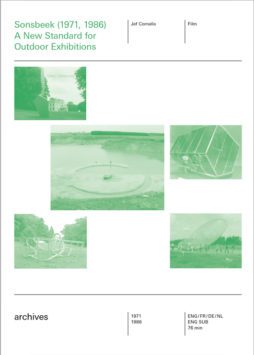 Expanding its mapping of landmark exhibitions and curatorial history from the 1960s to today, the Archives series dedicates its fifth DVD to Sonsbeek, an art manifestation held in 1971 and 1986 in and around Arnhem (Netherlands).

Mainly showcasing large installations and sculptures in natural surroundings, these two events are crucial to the history of outdoor exhibitions, shifting the boundaries of traditional sculpture.

Fifteen years later, Sonsbeek 1986, curated by Saskia Bos, proposed another rethinking of the exhibition by offering the visitor a ‘scattered experience’. The artworks were exhibited in specially designed glass pavilions throughout Sonsbeek park.

Filmed by Jef Cornelis with his habitually acute sense of dramaturgy and his provocative mise-en-scène of theoretical conflicts, Sonsbeek Buiten de Perken (1971) and Spaziergaenger mit Hund–Sonsbeek (1986) constitute a unique moving image documentation of those pioneering art events that renewed the exhibition format.

Published with Argos–Center for Art and Media, Brussels.