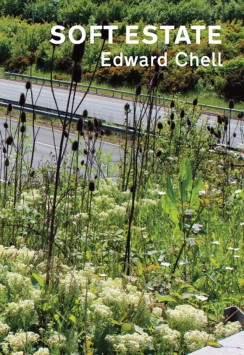 Edward Chell investigates motorway landscapes, linking these with eighteenth century ideas of the Picturesque which were formed at a time when commerce and tourism drove the development of roads and laid the foundations of today’s network.

Soft Estate features art works by Chell which explore the interface between history, ecology and speed, alongside essays giving new perspectives on how roads and travel have shaped both what we see and how we look at it.

‘These verges and ‘island’ hyper-landscapes, pulsing with wildlife, contain worlds where our rapid through-transit alters our sense of scale, which is simultaneously diminished and increased,’ says Chell. ‘Through making these paintings I’ve become acutely aware of the visual and metaphorical richness of these fragile, yet self-sustaining and tough environments.’

This publication accompanies the exhibition, Soft Estate at the Bluecoat, Liverpool, December 2013 – March 2014.