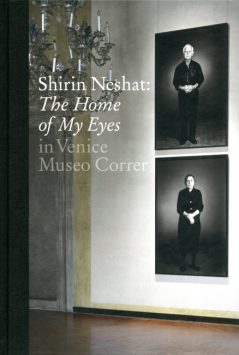 This catalogue features recent works by Iranian artist and filmmaker Shirin Neshat, including a selection of photographs from The Home of My Eyes series (2015), and her new video, Roja (2016).

Portraying the diverse people of Azerbaijan, Neshat’s The Home of My Eyes series comprises 55 photographic portraits inscribed with ink.

In this series, Neshat captures the individual character of her subjects in frontal, close-up portraits. While the subjects range in age and ethnicity, she unites them formally by staging them in similar clothing and poses, against a dark background.

The series additionally explores the subjects’ individual voices. During production, Neshat spoke with them about their perspectives on cultural identity and the concept of home.

She then composed texts, which are calligraphically inscribed across the portraits, from both the sittersʼ responses to the notion of homeland, and from poems by Nizami Ganjavi, a 12th century Iranian poet who lived in what is present day Azerbaijan.

The Home of My Eyes is exhibited at Museo Correr, Venice, as a collateral event of The 57th International Exhibition La Biennale di Venezia 2017.