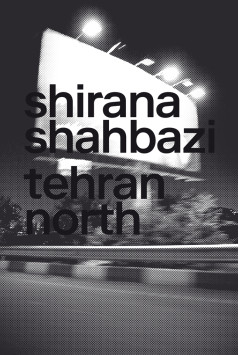 Tehran North, Shahbazi’s latest photo-project from October 2015, is a subjective road movie captured from a car driving through the Iranian capital at night. Designed by NORM (Zurich), it offers a black and white kaleidoscopic vision of Tehran’s urban landscape.

Camera Austria publisher and director, Reinhard Braun characterizes it as “A film noir traversing a megacity that, although remote and unknown to many, seems to be as common as others […] Housing areas, illuminated shops and billboards, highways, facades vanish either in darkness either in bright light, slipping away from any decisive representation. Uncanny encounters clash with everyday banality. The mysterious is at the same time forced and undermined, suppressing any exoticism.”