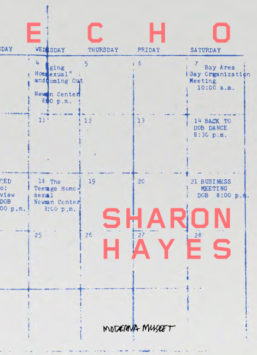 Sharon Hayes is one of the most influential politically and socially committed artists in the United States.

The exhibition, Echo at Moderna Museet, Stockholm, explores the gallery space as an echo chamber: with voices and materials reverberating between different historic events. It also references a feminist interpretation of the classical myth of Echo, the nymph who is cursed for her conversational skills. She is condemned to only repeat fragments said by others, sounds devoid of meaning.

The echo resonates as both material and form throughout the work, including a new work made for the exhibition as part of the artist’s ongoing Ricerche project, made in dialogue with Comizi d’amore (1965), Pier Paolo Pasolini’s interview on sex and relations.

Hayes video piece, Symbionese Liberation Army (SLA) (2003), is one example of what the artists calls anachronisms –  where an unresolved issue or conflict from the past is approached from a different moment in time. In this instance Hayes reads messages to a live audience from the kidnapped Patty Hearst to her parents that were aired on the radio in 1974.

Other ‘oral translations’ of texts and acts of speech by Hayes are replicated in the gallery for a contemporary audience.

Published on the occasion of the exhibition, Sharon Hayes: Echo at Moderna Museet, Stockholm (13 April – 11 August 2019).