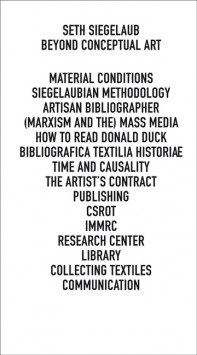 Seth Siegelaub (1941–2013) is best known for his decisive role in the emergence and establishment of Conceptual Art in the late 1960s.

This extensively researched publication documents the first exhibition about his life and work, which reassess his role as one of the distinctive characters in twentieth-century exhibition-making, while recognizing his atypical, inquisitive, and free-spirited genius.

Siegelaub was also a gallerist, independent curator, publisher, researcher, archivist, collector, and bibliographer. Often credited as the ‘Father of Conceptual Art’, he was (and remains) a seminal influence on curators, artists, and cultural thinkers, internationally and in Amsterdam, where he settled in the 1990s.

With revolutionary projects such as the Xerox Book, he set the blueprint for the presentation and dissemination of conceptual practices. In the process, he redefined the exhibition space, which could now be a book, a poster, an announcement, or reality at large.

Siegelaub’s radical reassessment of the conditions of art resonated deeply with the iconoclastic views of his contemporaries Carl Andre, Robert Barry, Daniel Buren, Jan Dibbets, Douglas Huebler, Joseph Kosuth, Lawrence Weiner, among others, with whom he developed close working relationships.

Published on the occasion of the exhibition Seth Siegelaub: Beyond Conceptual Art at Stedelijk Museum, Amsterdam, 12 December 2015 – 17 April 2016.