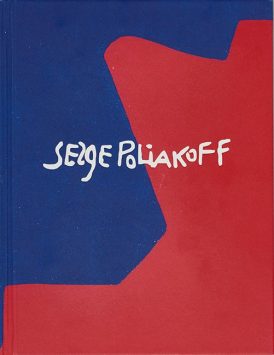 Serge Poliakoff (1900–1969) is considered one of the most important members of the School of Paris. Born in Moscow, he fled the Russian Revolution in 1917 and then first travelled to Constantinople before arriving in Paris in 1923, where he spent most of his life.

He began studying painting while earning a living as a musician, enrolling at the Académie Forchot and Académie de la Grande Chaumière in Paris 1929. Poliakoff studied at the Slade School of Art after relocating to London in 1935 where the artist discovered abstract painting, as well as the importance of layering colour.

This publication presents the artist’s important late works juxtaposed with a small selection of works from 1950 and 1951, in order to illustrate the circular nature of Poliakoff’s practice. By pairing certain works together what becomes apparent is a distinct return to form.

Poliakoff made a decisive departure into pure abstraction following a period of study in London in the mid-1930s. From 1950, his paintings explored simple forms, floating in harmonious compositions and made from pure colour, which the artist returned to and explored further at the very end of his career. These latter paintings, often referred to as ‘silent paintings’, exemplify a language of abstraction in which colour is paramount.

In 2013, the Musee d’art Moderne in Paris organised a large-scale survey of Poliakoff ’s work, in recognition of the artist’s importance within the school of Post-War European Abstraction, as well as to acknowledge his lasting influence.